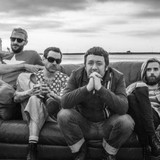 Slyrydes are a four piece band from Galway city, Co Galway Ireland. Slyrydes released their first five singles from March 2019 to March 2020(Mental Health, Point of view, Out Patience, Dangerous Animals & I claim to be intelligent) The singles collected much critical acclaim nationwide and in the UK. Paul McLoone (Today fm/ The Undertones) has championed the band since the first single “Mental Health”. Against many odds Slyrydes managed to write and record their debut album “What happens if you get happy” in 2020.