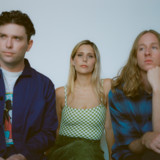 One listen to Lost Friends, Middle Kids critically acclaimed debut record and it’s clear that the rising Australian trio is aligned with each member’s own vision. Its 12 songs veer from brittle blasts of indie rock to elegiac piano ballads to pop anthems destined to ignite stadium singalongs. Lost Friends saw the band pick up the highly coveted triple j ‘J Award’ for Album Of The Year in 2018, alongside a nomination for Best Rock Album at the ARIAs. The album includes the band’s debut single and biggest hit to date, ‘Edge Of Town’, which has amassed over 20 million streams on Spotify. Single ‘Mistake’, with its infectious chorus that could have been lifted straight out of a long-lost Fleetwood Mac album, landed in Triple J’s 2019 Hottest 100 at number 64. The album was launched with a sold-out headline performance at the Sydney Opera House, a rare feat for any band. Whilst Sydney, Australia is called home, Middle Kids has spent a large part of their time as a band touring internationally with great success. The band have appeared on many U.S. late night television shows including Jimmy Kimmel Live and The Late Late Show with James Corden. They have toured internationally with the likes of Cold War Kids, Bloc Party and appeared at festivals such as The Governors Ball, Lollapalozza, Osheaga Festival and many more.