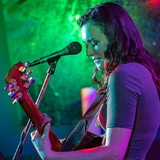 Gracie Day released her first EP in November of 2017 and quickly won attention for her songwriting, singing and performances, achieving "Best New Act" in 2017 and "Best in State for CT" in 2018 at the New England Music Awards, an organization that acknowledges musical acts throughout all six states. Also, in 2018, Day was a semi-finalist in the international Unsigned Only Songwriting Contest, and nominated in the prestigious Boston Music Awards. This past summer, Gracie Day released a song, "Tennessee,” that gained tens of thousands of plays on Spotify and landed radio placement on Boston FM station 101.7 The Bull.

Recorded at the famous Sound Emporium, a legendary studio with a roster of everyone from Johnny Cash, REM, to Alabama Shakes, Gracie Day’s new EP of six songs called “The Nashville Sessions”, will be released in March 2019. That same month, Gracie will begin recording her third album in under two years. For most of her life, Gracie kept her talents to herself until 2014 when she first started performing publically. Playing countless cafes and bars, it wasn’t long until she was opening for Rock ‘N Roll Hall of Fame inductee John Lodge of the Moody Blues. She has also shared big stages with beloved grassroots band, Adam Ezra Group, been on festival bills with Sister Sparrow and the Dirty Birds, and has even played small sides stages at stadium concerts featuring major acts such as Willie Nelson, Sturgill Simpson, Margo Price, Hunter Hayes, and Lukas Nelson.