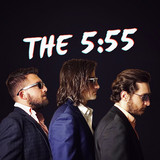 The 5:55 (pronounced THE-FIVE-FIFTY-FIVE) was born out of the dark basements of fraternity houses along the I81 corridor. A lack of local music venues meant fraternity and sorority parties were the ideal space for the band to perform. They quickly realized this was a blessing in disguise. One party later, The 5:55 was booked for nearby college shows nearly every weekend. After that first year, word poured out faster than cheap beers at happy hour, and soon the band was playing colleges all across the country. The band teamed up with Producer Matt Squire and Producer Austin Bello

to record their debut album. They were in the studio when the world suddenly came to a grinding halt, but that didn’t stop them from working. Squire and the band decided to develop technology to make recording remotely possible. They quickly found what they put together also applied to multi-location live streaming. So Entangled Audio was formed. Entangled Audio allows for an intimate experience with the listeners. The technology provides the listener to interact with the band on a personal level, asking questions about the song, requests to hear their favorite track, and questions directed towards the band in general. This experience is much more personal and engaging than traditional live streams. The 5:55 and entangled audio are very proud of the capabilities of the technology and are eager to start demonstrating this across social media platforms.