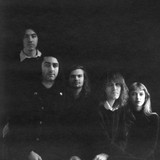 The Mystery Lights story begins in 2004 in the small town of Salinas California when friends Michael Brandon and Luis Alfonso - whose shared fondness for groups like The Mc5, Velvet Underground, Dead Moon, and The Fall (just to name a few) - decided to join forces and craft their own brand of unhinged rock and roll. From there they spent the better part of 10 years touring relentlessly before migrating to Queens, New York in 2014. The buzz soon caught the attention of Daptone Records execs who were in the beginning stages of launching a new rock-centric imprint, Wick Records. Though a rock band at heart, the parallels to what Daptone Records had traditionally looked for in their Soul artists was undeniable.

The release of their debut single “Too Many Girls” b/w “Too Tough to Bear” launched to mass critical fanfare. After two years of break-neck, non-stop touring, the group settled back into Queens to prepare for their second full-length record, Too Much Tension!