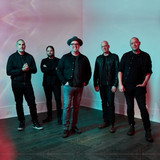 MercyMe is a contemporary Christian music band formed in 1994 signed with Fair Trade Services. With more than 9 million units in cumulative sales, MercyMe has seen 28 of their songs reach No. 1 across multiple radio formats, in addition to garnering four mainstream radio hits. Their landmark song “I Can Only Imagine” was the first digital single in Christian music history to be certified platinum and double-platinum. In 2009, Billboard named MercyMe's "Word Of God Speak" the No. 1 Song of the Decade and the group the No. 1 Artist of the Decade in both the Christian Songs and Christian AC Songs categories. In addition, they have multiple GRAMMY® nominations, American Music Awards, and GMA Dove Awards to their credit. They have sold out venues throughout the US and Canada and have appeared on the Macy’s Thanksgiving Day Parade, The Today Show, The Tonight Show with Jay Leno, FOX & Friends and in the pages of Entertainment Weekly, The New York Times, and more. Today, MercyMe continues touring rigorously, picking up more No. 1 hits along the way. Their ninth studio album, Lifer, released in March of 2017. Lifer went No. 1 on Christian Soundscan and No. 10 on the Billboard Top 200 overall chart during its first week. The band is currently promoting the feature film titled “I Can Only Imagine,” a true story based on the life of lead singer Bart Millard who wrote the mega-hit song “I Can Only Imagine” after the loss of his father to cancer. The film will release in March of 2018.