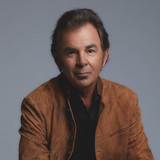 No matter the genre his music is classified under, Cain strives to create songs that are both hopeful and timeless. He’s now a Rock & Roll Hall of Fame inductee and longtime Journey member. However, at one point he was struggling to make it as a musician in Los Angeles. Rather than giving up, he chose to be encouraged by his father’s words, “don’t stop believin’. Cain pressed on, and eventually joined The Babys before being asked to join Journey. Cain rounded out the lineup and songwriting prowess on the band’s defining, 9X Multi-Platinum album Escape, which fittingly opens with the 5X Platinum single, “Don’t Stop Believin’. Along with penning Journey’s mega hit “Faithfully,” Cain co-created huge anthems for the band. Cain’s musical ventures, including co-founding supergroup: Bad English, have earned him numerous accolades. He’s had multiple Billboard hits; Gold, Platinum & Diamond-selling records; a star on the Hollywood Walk of Fame; and a GRAMMY® nomination to name a few. Following a transformational encounter with God, Cain committed space to write songs about his growing faith, culminating in 5 albums in 5 years. Continuing his tradition of crafting a new solo project each year, Cain is currently working on a worship record slated to drop in the Fall of 2021. Although he’s been playing music for four decades, Cain continues to climb to the next level, showing no signs of slowing down. www.jonathancain.org