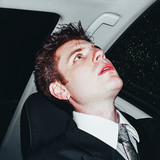 When the light hits the rusting disco ball and green laser hearts float through the smoke-filled club air, CRIMER's distinct style of dancing begins to hypnotise and entrance. With his warm, unforgettable voice, he casts a spell on audiences, entraps them with his relentless beats, and carries them away with a captivating refrain. CRIMER has an undeniable faible for the sound of decades past. With chorus guitars and a centre parting taken straight out of the boyband handbook, his melancholy-tinged songs manage to distil several decades of music into one sound. The astonishing thing is that these pop sounds seem both familiar and radically new at the same time.