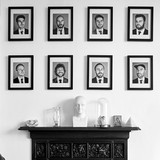 Reggae/electronic collective Gentleman's Dub Club are synonymous with the U.K. festival scene, where they regularly perform their take on dub and soundsystem culture. All nine members met in Leeds in 2006 when they were all students and would regularly venture down to a monthly dub night, SubDub, which was run by Leeds-based sound system crew Iration Steppas -- cementing their joint love of the scene. The Dub Club is loosely led by vocalist Jonathan Scratchley and comprises Tommy Evans (drums), Luke Allwood (keys), Nick Tyson (guitar), Toby Davies (bass, synths), Niall Lavelle (percussion), Matt Roberts (trumpet), Kieren Gallagher (sax), and Harry Devenish (sound). In 2008, Scratchley also co-founded Croatia's Outlook Festival, where the band played every year for over ten years. The following year, the band released their debut EP, Members Only, through Ranking Records. Between 2009 and 2012, Gentleman's Dub Club strengthened their live shows, appearing on an almost annual basis at a number of the U.K.'s leading festivals, including Glastonbury, Bestival, and Boomtown. In 2013 they released their debut full-length, FOURtyFOUR -- a reference to the house number where the band originally practiced. For their second album, 2015's Big Smoke, they switched labels from Ranking Records to Easy Star. Changing the pace for their third full-length album, 2017's Dubtopia, the band featured a larger number of guests including Lady Chann, Taiwan MC, Parly B, and Eva Lazarus. The group returned in 2018 with their fourth LP Lost in Space, which featured performances from Swedish reggae star Million Stylez and revered reggae musician Winston Francis. The onset of the COVID-19 pandemic initially interfered with the recording of their fifth studio album, but the group saw an opportunity to take their sound back to basics, resulting in their 2021 album Down to Earth. ~ Liam Martin, Rovi