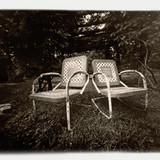 The Pickin' On Series started modestly in 1993 with the release of Pickin’ On the Movies, tributes to The Beatles and Eagles soon followed and by 1997 the Pickin’ On Series was on fire. The release of Pickin’ On The Grateful Dead brought CMH a true hit and the series regularly dominated bluegrass music charts with distributors clamoring for more. Excited with this success, CMH’s team continued cutting Pickin’ On hits and looking for innovative ways to keep the music fresh. 2003 brought the hit Fade to Bluegrass: The Bluegrass Tribute to Metallica featuring the group Iron Horse, which added yet another dimension to Pickin’ On. This landmark release introduced bluegrass singing and harmonies to the series and the concept of an established band behind the music, giving it a rich personality. Fade to Bluegrass was so well received in fact that it warranted a second Metallica tribute. Iron Horse, Cornbread Red, and The Infamous String Dusters are just a few of the bands that have become the voices behind the series in addition to longtime star producers and players such as David West and Mark Thornton. At the same time, the series was broadening the reach of its repertoire, with successful tributes to modern and alternative artists like Modest Mouse, Green Day, and Mumford and Sons. The Pickin’ On Series continues to thrive with one hand in traditional bluegrass and the other in popular music, ready for the next chance to create innovative bluegrass music.