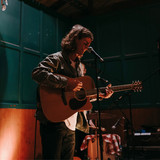 This New Light is an indie-folk music project based on the Sunshine Coast, Australia. With a debut EP release experiencing a positive response in early 2019, Samuel Ayling moved on from a previous collaboration with long-time friend and musician, Tom Logan, to pursue his musical aspirations as the sole songwriter for the project. In the later months of 2019, This New Light released the single, 'The Other One'; a song of vulnerability and introspection that explored a more experimental sonic palette than what we'd heard previously. Executing an equally as impressive live set, This New Light is one to watch for future releases and gig appearances.   Ayling has now released his sophomore EP 'you, all along', and was excited to tour the record in early September of 2021. With each show selling out on this debut headline tour, Ayling also locked in a festival slot at Road Trip Festival (Gold Coast), playing alongside the likes of Hollow Coves and The Dreggs.   Balancing full-time study and other projects (including film scoring for a Brisbane creative and playing bass in two indie-rock bands), Ayling hopes that 2021 will see further growth in his following and his sound.