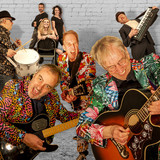 ‘Kartoon World’ is available from:   https://thekorgis.com/kartoon-world-sales   First 50 vinyls, double deluxe CD’s, standard CD’s & Box Sets (everything plus extras) personally signed!   The Korgis are a British pop band known for their hit singles, 'If I Had You' in 1979, and "Everybody's Got to Learn Sometime' in 1980. (A number one in France, Spain and Australia, but charted in a total of 37 countries)   The band's original members were singer/bassist/guitarist James Warren and singer/guitarist/keyboardist Andy Davis, both founder members of the legendary 1970's group Stackridge.   The Korgis of today feature founder member James Warren with John Baker, additional lead vocalist from 1992, Al Steele on guitar from The Korgis 90's live band, keyboard virtuoso Nigel Hart, backing vocalists Born to Win and studio ace Paul Smith on drums.   John Baker has a strong connection with Tears For Fears having been in The Graduate with Curt and Roland. He pops up on some of the Tears For Fears albums with the occasional vocal.   Like the rest of the entertainment industry 2020 has paused playing live! We have used this time to record a new album of original songs, the first in 30 years, which will be released mid 2021.   Be sure to check back here regularly to listen to the singles as we release them.