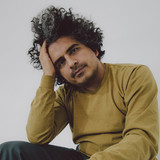 One of producer and singer/songwriter Roberto Carlos Lange's numerous monikers, Helado Negro's evocative ambient pop songs honor his Ecuadorian heritage and the diverse sounds he heard while growing up in Florida. On early albums such as 2009's Awe Owe, Lange's blend of folk, jazz, electronic, and Latin elements felt like a natural evolution from his collaborations with Prefuse 73 and Savath & Savalas. As time went on, Helado Negro's tone poems grew increasingly focused and eloquent. Lange delved into childhood memories on 2014's Double Youth and earned a wider audience with 2016's Private Energy, thanks in part to the singles "Young, Latin and Proud" and "It's My Brown Skin." On 2019's This Is How You Smile, he reflected on the complex relationship between immigrant parents and their children in poetic and timely ways.

Born in South Florida in 1980 to Ecuadorian parents, Lange grew up listening to Miami bass and electro music while living in a Caribbean neighborhood. Later, he studied computer art and animation at Georgia's Savannah College of Art and Design, where he also began making music in earnest after studying sound design and audio programs in his classes. He made his recording debut in the early 2000s, when he released music under a few different names, most notably ROM (a collaboration with drummer Matt Crum), Epstein, and Boom & Birds. The eponymous album ROM (2005) on Wimm Recordings is a compilation of Lange's collaborations with Crum dating back to 2000. He was most prolific as Epstein, releasing the full-length albums Puñal (2004), Gente Sin Pueblo (2005), Canto de Hermanos (2007), and Otros (2008); the former two were on the label Botanica del Jibaro, the latter two on Arepaz. As Boom & Birds, he released the album Camino de Manos Chuecas (2005) on Arepaz. After moving to Brooklyn, New York, in 2006, Lange began a fruitful collaboration with Guillermo Scott Herren, earning co-production credits on the Prefuse 73 releases The Class of 73 Bells (2007) and Everything She Touched Turned Ampexian (2009) on Warp Records, plus the Savath & Savalas album La Llama (2009) on Stones Throw. In the wake of these high-profile releases in collaboration with Herren, Lange made his album debut as Helado Negro with Awe Owe (2009) on Asthmatic Kitty. A highly collaborative effort, Awe Owe featured input from Herren, former ROM collaborator Crum (also of Feathers), Jon Philpot (the frontman of Bear in Heaven), and numerous others. By contrast, Lange recorded Helado Negro's second album, 2011's Canta Lechuza ("Owl Singing"), after holing up in a cabin in Connecticut. That year also saw the release of another Epstein album, Sealess See. In 2012, Lange collaborated with Julianna Barwick as OMBRE, releasing the album Believe You Me. Invisible Life, which featured Lange singing in English as well as Spanish, arrived in early 2013. Helado Negro returned in 2014 with Double Youth, a nostalgic, home-recorded set of songs that took inspiration from a poster he had owned since childhood and rediscovered while cleaning out a closet. In 2015, collaborators including Stereolab's Laetitia Sadier and Wilco's Mikael Jorgensen helped bring songs from Helado Negro's Island Universe Story cassette series to St. Paul, Minnesota's Ordway Concert Hall as Island Universe Story: Selected Works. The following year, all three volumes of Island Universe Story -- which were released between 2012 and 2014 -- were issued as a compilation by Asthmatic Kitty. Helado Negro's next album was preceded by a pair of singles, 2015's "Young, Latin & Proud" and "It's My Brown Skin," reflecting the themes of Latin pride and cultural awareness found on the rest of Private Energy. Informed by '70s Latin soul and dub, the album appeared in October 2016. That year, Helado Negro released the Island Universe Story Four EP, which Lange followed with the Adult Swim single "Come Be Me" in 2018. The following March, Lange issued Helado Negro's sixth album This Is How You Smile, a set of songs that expanded on Private Energy's themes with a more atmospheric approach. A portion of the album's proceeds went to the immigrants' rights organization United We Dream. ~ Jason Birchmeier, Rovi