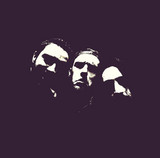 Born from a chance encounter, under the guidance of the mentor Andrea Cornini, Antonio Marinelli (guitar / voice) and Alessandro Sironi (drums) used to play together for a series of alternative projects. In parallel, in 2010 they founded Muga, reborn from the words of an old another-name-project of the bassist Stefano Battisti. Initially with a Funk Groovy footprint decides to change genres and explore what were the influences and favorite genres of the two, Grunge and Punk Rock with Progressive Metal nuances. Influences from bands such as Alice In Chains, Tool, Incubus, Blink-182 come to the surface in their music production. In 2013 they released the first album Muga, recorded live in 1 day and mixed in 3, tired about the studio album

overproduction of the period. The disc is recorded at Aemme Records, mixed and mastered by Salvatore Addeo. After the release of the first album Stefano Parma gives up the group and Muga find the worthy replacement in Stefano Battisti (bass), with whom they record the songs for 2015 EP Adolf, under the supervision of Mick Castellana, then mastered by Maurizio Giannotti of Newmastering Studio in Milan. After the release they decide to take a reflection pause