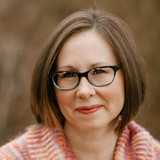 Andrea Vestby is a Canadian Christian contemporary singer/songwriter and worship leader at The Father's House church in Bon Accord, Alberta. She has been writing songs for 15 years, but only recently began recording. She is an advocate to end domestic violence by sharing her story. The songs on her debut EP, Beyond The Fallout to be released March 29, 2019 were written out of her own personal struggles to find hope and healing.   Her first single 'Hardest Time of Year' is close to her heart. It is a song meant to help us look outside of ourselves to see those who are hurting and to be there for them. The song was written the first year she became a single Mom to her six children, after 15 years in an abusive marriage. She has since found healing and restoration in her life, an amazing husband and 4 beautiful step-children. However, she never forgets the struggle and would like to encourage others. Christmas is a beautiful time of year, but for some it is the hardest time of year.