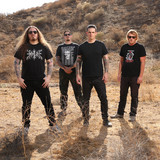 Little is known about extreme sonic terrorists Nails (and that's the way they like it) save that the trio hail from Southern California and consists of vocalist/guitarist Todd Jones (ex-Terror, Betrayed, Carry On, Snake Eyes, Internal Affairs), bassist John Gianelli, and drummer Taylor Young, and that their music takes hardcore to its illogically extreme conclusion (beyond grindcore, crustcore, etc.). So limited is the band's appeal, in fact, that their first two albums (if you can call them that, seeing as their ultra-brief songs add up to a mere 15 minutes in length), 2009's Obscene Humanity EP and 2010's Unsilent Death, were both issued in limited runs of 1,000 copies, before the latter gained wider distribution through a Southern Lord reissue. A second proper album, the hyper-intense and ultra-compact Abandon All Life, arrived on the label in 2013. The trio returned with their slightly longer yet just as intense third album, You Will Never Be One of Us in 2016, after signing a new deal with Nuclear Blast. ~ Eduardo Rivadavia, Rovi