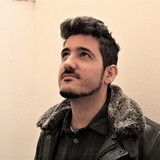 Alvaro Aragüés is a music producer and film score composer from Spain. He has written music for films like "Novatos" (Hazing) or "Vigilo el camino" (Walk the Line). Lately he has worked as the producer and arranger for other artists like Jesús Viñas, La Mujer Inversa, Pardiez... He also writes for his Solo Projects, experimenting between genders like pop, funk, rock, neo-classical, minimalism, cinematic, and Jazz. He is actually working on songs about the lockdown period of 2020. 'Bubble' is the first one, and will be released on December 9. Alvaro began his musical life as a guitarist in rock and roll bands. Afterwards he also wrote and played in funk and blues-rock bands like Slick Trio, and Dislocated Boys. He studied jazz guitar and sound engineering in his home town, and then classical composition in the conservatoire of Navarre, Spain. More info on his website https://alvaroaragues.com/