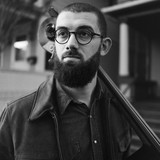 Nate Sabat is a bassist, vocalist, songwriter, and arranger currently based in New York City. He is a founding member of award-winning bluegrass band Mile Twelve. A native-New Yorker, he attended LaGuardia High School as a vocal principal and went on to study upright bass at the Berklee College of Music. He has performed on stages in the Netherlands, Germany, Austria, The Czech Republic, Ireland, the United Kingdom, Japan, New Zealand, Australia, Canada, and the United States.   Nate has written vocal music for NPR's Radio Lab, written string arrangements for the Heifetz International Music Institute, and written songs that are in rotation on Sirius XM’s Bluegrass Junction channel. The debut project under his own name, Walking Away, was released on November 30th, 2018. At the core a rock project, it draws from influences as wide as the Stanley Brothers, Dvořák, Joni Mitchell and XTC.