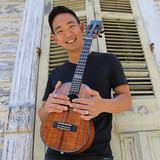 Jake Shimabukuro has been redefining what the ukulele is capable of for the last 20 years, and on 14 February 2020, he returns with his new album ‘Trio,’ his first on Music Theories Recordings, a division of Mascot Label Group. It’s fitting that 21 years after his first release, Shimabukuro is continuing to push boundaries on both the instrument and himself. What would the 4 year old Jake make of the adult Jake now in 2020, from trying to master those first three chords to playing in front of Queen Elizabeth II, touring the world playing some of the not only most iconic venues, but iconic landmarks. He brings a new way to approach an instrument with only four strings and two octaves that has inspired others to pick up the ukulele worldwide. ‘Trio’ marks another chapter in his remarkable story so far and feels as fresh and inventive as his earliest releases. 2020 will prove to be another landmark year for Shimabukuro, with a second special release to follow later in the year, where he collaborates with a number of high-profile guests. ‘Jake & Friends’ will feature artists such as Lyle Lovett, Bette Midler, Jack Johnson, Jon Anderson (Yes), Warren Haynes (The Allman Brothers Band, Gov’t Mule), Moon Taxi, Ray Benson (Asleep At The Wheel) and Michael McDonald (The Doobie Brothers) amongst others. More details to follow.