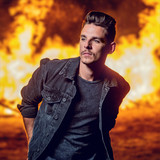 Growing up in the small town of Wingham on the Mid North Coast of NSW, James spent his early years hopping from farm-to-farm with his dad, selling and servicing tractors. With hours spent on the road travelling, James was introduced to great artists like Johnny Cash, Waylon Jennings and Garth Brooks and at just four years of age, James hit the stage for the very first time, performing “Friends in Low Places” in front of his kindergarten class. From that moment on James’s future was set - he would be a Country singer!   And now, James is releasing his debut single, “RAISED LIKE THAT” – a song that captures his story, and the people and places that shaped him to be the person he is today. “RAISED LIKE THAT” tells the story of community, integrity, and a celebration to a way of life of people who grew up in a small close nit community. The anthemic production and lyrics are reminiscent of Eric Church and Kip Moore and the track is undeniably infectious.