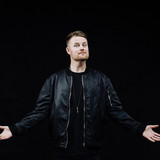 OPIUO never waits around to evolve. The award-winning producer/artist born Oscar Davey-Wraight remains a consummate innovator. Raised in small-town New Zealand, mum and dad loved music so much they lent their land to festival promoters, allowing his formative memories to be highlighted by one unforgettable gig after another. A move to Melbourne in 2005 set his path firmly onto music, and he quietly emerged as a disruptive force.   Among many accolades, he notched #1 hits on iTunes, Beatport, HypeMachine, and garnered “Best Electronica Album” at the 2014 New Zealand Music Awards for Meraki. His 2016 follow-up, Omniversal, also received a nod for “Best Electronica Album” at the same awards. Not only has he sold out venues worldwide, but he also graced the stages of Lollapalooza, Glastonbury, Electric Forest, and Splendour In The Grass, to name a few. His live production morphed with each musical iteration from solo, to 5-piece band to the 21-piece Syzygy Orchestra. OPIUO led the Orchestra in an interpretation of his works at the legendary Red Rocks Amphitheater and back home at Forum Melbourne, the former later chronicled on a live album release. Beyond acclaim from Billboard and Dancing Astronaut, his remixes span everyone from Gwen Stefani, Kimbra, and Pretty Lights to Infected Mushroom. His SYZYGY EP series exemplifies his artistic alchemy, fully realized on the second installment, SYZYGY 02, in 2019 - released via his own label Slurp Music.   His evolution continues.