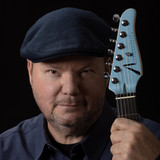 Christopher Cross was far and away the biggest new star of 1980, virtually defining adult contemporary radio with a series of smoothly sophisticated ballads including the chart-topping "Sailing"; seemingly as quickly as he shot to fame, however, his star descended, although he continued recording and touring for years to come. Born Christopher Geppert in San Antonio, TX on May 3, 1951, Cross first surfaced in the Austin-based cover band Flash before signing a solo contract with Warner Bros. in the autumn of 1978. His self-titled debut LP appeared two years later, with the lead single "Ride Like the Wind" rocketing to the number two spot; the massive success of the second single, "Sailing," made Cross a superstar, and in the wake of two more Top 20 hits, "Never Be the Same" and "Say You'll Be Mine," he walked off with a record-setting five Grammys in 1981, including Best New Artist and Song of the Year for "Sailing." He soon scored a second number one as well as an Academy Award with "Arthur's Theme (Best That You Can Do)," which he co-wrote with Burt Bacharach, Carole Bayer Sager, and Peter Allen for the smash Dudley Moore film comedy Arthur. Cross' much-anticipated sophomore effort, Another Page, arrived in 1983, but except for the Top Ten entry "Think of Laura" (popularized through its constant presence on the daytime soap phenomenon General Hospital), the album failed to repeat the success of its predecessor, and somewhat amazingly, he never returned to the Top 40 again. Every Turn of the World appeared to little notice in 1985, and when 1988's Back of My Mind failed to chart altogether, Cross was dropped by Warner. His next album, Rendezvous, did not appear until five years later on BMG. Window followed in 1995, and in 1998 he signed to CMC International for Walking in Avalon, a two-disc effort split between new studio material and live recordings of his past hits. Cross returned in the spring of 2000 with The Red Room. Two years later, Rhino released the comprehensive hit collection The Very Best of Christopher Cross. Cross closed out the decade with a Christmas album in 2007 and an acoustic album called The Cafe Carlyle Sessions in 2008. Dr. Faith, his first collection of new songs in ten years, appeared in the fall of 2010. ~ Jason Ankeny, Rovi