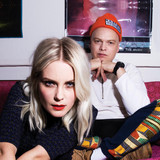 Putting a 21st century spin on the hip late-'60s world of Burt Bacharach, Sly Stone, and Barbarella, Denmark's the Asteroids Galaxy Tour had barely let their demo out into the world before fame came calling thanks to Amy Winehouse and the iPod family. Multi-instrumentalist Lars Iversen and vocalist Mette Lindberg formed the Asteroids in 2007. Thanks to a freshly pressed demo landing in the right hands, their debut gig was an opening slot at the request of Winehouse when the superstar singer visited the duo's hometown of Copenhagen. Soon after they were signed to major-label Universal, which released their debut single, "The Sun Ain't Shining No More," in 2008. As the Asteroids were preparing their debut album and expanding their live lineup to a six-piece, their B-52's-flavored, retro-party single was featured in a television commercial for Apple's iPod Touch MP3 player. Fruit, which arrived in 2009, included "The Sun Ain't Shining No More" along with other playful tracks; by the time of the band's follow-up, 2012's Out of Frequency, the Asteroids Galaxy Tour had moved in a more expansive, sophisticated direction. They continued to refine their approach on 2014's Bring Us Together, which was released by Hot Bus Records and saw the duo incorporating hip-hop, reggae, P-funk-style funk, and a more straightforward pop into their already happily over-stuffed sound. ~ David Jeffries, Rovi