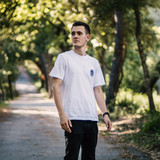 Born on August 22nd, 2001, Louis has always been interested in music. At the age of 5, he was starting to play the piano, and at 12 years he devoted himself entirely to electronic music. His parents bought him his first controller to mix, and mixing became very fast a real passion for him. He then started creating his own music and introducing it into his mixes. Louis had the opportunity to mix at many smaller parties with friends, but also in front of the students on bigger Highschool parties. He also participated in 2018 in the contest “Best Junior DJ France” where he finished 4th best DJ, which is a good success for the first performance in front of an unknown public. Right after, at barely 16 years, he participated on a very big event in Marseille, the Summer Stadium Festival. He was chosen to mix at the Warm up at this festival in the Velodrome Stadium, which allowed Louis to meet great artists such as Don Diablo, Henri Pfr and many others.