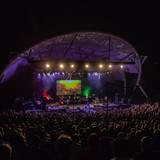 Big Big Train was originally founded in 1990 and went through a number of line-up changes in the first 15 or so years of its existence. In 2009, the band decided on a fresh start and the current version of Big Big Train began to take shape. Since then, Big Big Train has gone on to win six Progressive Music Awards, has played a number of sold-out shows and has seen a Top 40 album chart placement in the official UK album charts for Grand Tour (2019) plus a number one album in the official UK rock charts