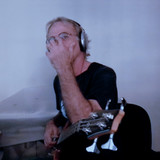 Luiz Esteves is an independent musician based in Belo Horizonte, Brazil. He started his musical career in Patos de Minas, MG. Luiz Esteves was the lead singer for such local bands as

"Os Asteróides", "Trapps" and "Magos do Sol". In 2000, Luiz founded Leyline with his son Gabriel Esteves. Apart his musical work with Leyline (6 albums and 2 singles), Luiz has his solo project and has released 13 albums and two singles so far. Luiz's new album Modern Dystopias, released on 23 April 2021, is a fictional love story inspired by George Orwell's 1984, Terry Gilliam's Brazil, and by some current totalitarian regimes in the world. A couple living in a near future where the State determines what is and what is not allowed. LOVE IS FORBIDDEN