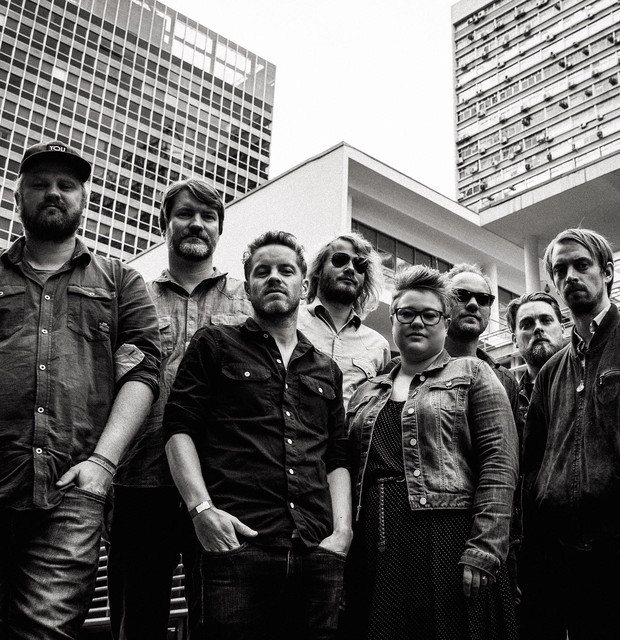 Boundary-crashing Norwegian big band Jaga Jazzist have found favor among fans of post-rock, progressive jazz, and left-field dance music, among other styles. Led by composer and multi-instrumentalist Lars Horntveth, the group sports an ever-shifting lineup comprised of some of the most talented musicians from Norway's jazz and experimental music scenes. On albums such as 2001's A Livingroom Hush, the group spiked their rhapsodic, energetic jazz tunes with glitches, noise effects, and breakbeat-like drumming, splicing influences such as Tortoise, Charles Mingus, and Squarepusher. Later efforts such as 2010's One-Armed Bandit were less electronic and closer to progressive rock, with 2015's Starfire and 2020's Pyramid consisting of lengthy suites, as opposed to the shorter songs of their earlier albums. The sprawling jazz-meets-electronics ensemble came to life in 1994 when their main brain and songwriter, Lars Horntveth, was only 14. Two years later their debut album, Jævla Jazzist Grete Stitz, appeared, and Norwegians got their first taste of the band's combination of jazz chops and electronic quirkiness, which additionally incorporated genres such as rap and reggae. Two years after that the Magazine EP appeared, but it was 2001's A Livingroom Hush that grabbed all the attention due to rave reviews and distribution by Warner Bros. in their homeland. Coldcut's label, Ninja Tune, picked the album up for worldwide distribution in 2002 and BBC radio listeners crowned it the Jazz Album of the Year. The Animal Chin EP appeared in early 2003, introducing Jaga Jazzist to American listeners, and was followed by The Stix, an album that found the band using more electronics and drum'n'bass-inspired rhythms. The more rock-influenced What We Must followed in 2005 before a five-year break took the band out of the studio and off the road. Jaga Jazzist returned in 2010 with One-Armed Bandit, featuring new recruit Stian Westerhus on guitar, though he left the group after that recording. The band's next project was its most ambitious to date: a concert recording with the 25-member Britten Sinfonia, which found the group in a sprawling, colorful collaboration with one of England's finest modern classical orchestras to present something that stretched the creative boundaries of both groups. The recorded evidence, Live with the Britten Sinfonia, was issued in May of 2013. A suite of songs based on the constellations, and how views of the stars change around the globe, the 2015 album Starfire was influenced by Horntveth's move from Norway to Los Angeles. "Prokrastinopel," a non-album single featuring Swedish guitarist Reine Fiske (Dungen, Fire! Orchestra), appeared in 2017. The group returned in 2020 with Pyramid, a set of four lengthy compositions recorded in just two weeks, making the release one of their most spontaneous efforts. The self-produced album appeared on Brainfeeder, the Flying Lotus-curated Los Angeles imprint. ~ David Jeffries, Rovi