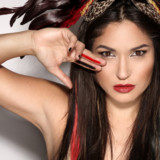 Charissa Saverio, a.k.a. DJ RAP, is an award winning multi platinum artist and has been the undisputed queen of the turntables and voted the number one female DJ in the world. She owns two labels: Propa and Impropa Talent, developed her creative direction as a full-fledged producer.

Her breakthrough album, 'Learning Curve' was critically acclaimed by Rolling Stone magazine and given 4 and a half stars She is also a classically trained pianist and songwriter, dominating such genres as Tech house and drum & bass as well as pop electronica. Over the course of DJ Rap’s career she has collaborated and worked with many talented and influential professionals. BT, Hans Zimmer, The Prototypes, Hybid, and DJ Tydi, to name just a few, producing music for Playstation, Wii, and 7 major movies. Examples of her portfolio are evident in her work for Twix, Mission Impossible (Tom Cruise), Isolation, Run Lola Run, Enough (J-lo), Rogue Trader (Ewan McGregor) and four documentaries. Rap is a trailblazer and is the first DJ in the D & B world to set up a Patreon that encompasses all her talents to entertain her fans as well as dominating the charts with her current body of work.She also created an Ableton course that has been licensed to many schools and continues to be the go to course for many.