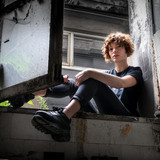 Eyemèr is an indie singer-songwriter whose work is influenced by artists such as Soko, Daughter, Bon Iver and Waxahatchee. Arlo Devreese’s fragile, raw voice and dark lo-fi sound have become their trademark. In 2014 Eyemèr reached the finals of Belgium’s greatest competition for musicians: Humo’s Rock Rally. In March 2016 their debut album ‘Temporarily Colourblind’ came out, a collection of 10 very personal songs that get under your skin. ‘Losing Faith’, the fourth track from the album, got airplay on Radio 1 for a little while and ‘Promise’, the first single, was shown on the Television Program ‘Fans Of Flanders’. In 2016 and 2017 Eyemèr was the support act of well-known Belgian bands such as Marble Sounds, Isbells, Chantal Acda, Astronaute and Mad About Mountains. Almost 4 years after the release of their debut album ‘Temporarily Colourblind’, Eyemèr is back with an EP called ‘Good Mourning To You’. Michiel De Maeseneer (Balthazar, Bazart, Douglas Firs, Faces on TV) is the producer of the EP. As usual the songs on this EP are about mental health, a topic around which Eyemèr tries to break the stigma with their music. But there’s more. 2018 was the year Arlo Devreese came out as non-binary and embraced their queer sexuality to the fullest. This is apparent in the release, through the songwriting, but also through the music video(s).