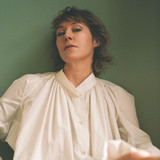 Martha Wainwright is beginning again. The beguiling performer and songwriter returns with Love Will Be Reborn.

Not since 2012’s Come Home to Mama has a Martha Wainwright record been so full of original written material. Wainwright’s fifth studio album follows recent years of loneliness and clarity in search of optimism and joy. The album was produced by veteran Canadian producer Pierre Marchand (best known for collaborations with Sarah McLachlan.) Album opener “Middle of the Lake” reinforces Wainwright’s path forward as she sings over voltaic chords and percussion, “I sing my songs of love and pain / Winds of change or simply singing, I'm singing in the rain.” Her work never shies away from an existential throbbing wound. “There are a couple major subjects on the record. From what I can tell, there's really dark and then light,” she says,” It really is reflective of a very difficult period of divorce. Then, after that, it’s meeting somebody new and amazing. And so you hear certain songs about this new love.” Wainwright's role as an artist has always been to embrace wildness and sketch out raw depth. This edge is what makes her uncompromisingly herself and continues to draw in an audience two decades on. Love Will Be Reborn captures Wainwright’s heart in transition. Rising out of some painful depths, as she says much like a phoenix from the ashes of an existential twilight, Wainwright bore witness to what her heart endured to find a new joy once more.