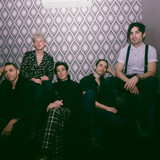 When NIGHT RIOTS first broke out on the scene, the Los Angeles-based quintet was touring in support of Howl, their critically acclaimed EP featuring the hit single “Contagious,” which shot to No. 1 on SiriusXM’s Alt Nation while amassing over 15 million streams. The band (vocalist Travis Hawley, bassist Mikel Van Kranenburg, guitarists Nick Fotinakes and Matt DePauw and drummer Rico Rodriguez) played hundreds of shows in support, sharing stages with the likes of Lana Del Rey, Morrissey, Cage The Elephant, Walk The Moon, OK Go, The Mowgli's, Angels & Airwaves and many more, while also garnering praise from the likes of KCRW, Huffington Post, KROQ, All Things Go, Nylon and AV Club. A year later they returned with the much-anticipated LOVE GLOOM, produced by Joe Chiccarelli (Morrissey, Spoon, The Strokes) and recorded at Sunset Sound in Los Angeles. Among the album’s many highlights are “Nothing Personal,” “Fangs,” “Breaking Free,” and “All For You,”

all part of a collection of songs filled with moody-but-danceable melodies and atmospheric arrangements. The band toured in support of Love Gloom with the likes of Andrew McMahon, Atlas Genius, The Hunna and The Maine before setting out on their own headlining tour, selling out shows across the US and UK. In July 2019, the band released NEW STATE OF MIND, an album full of bright colors and nostalgic textures, and in conjunction, have embarked on a headlining release run as well as UK festival debuts in Reading and Leeds.