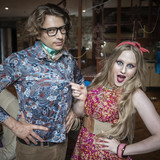 Thomas & Muse are an experimental performance-art collective featuring trumpeter Ben Thomas and artist Lucy Muse. Naked imagery lies at the heart of their work which features a curious concoction of trumpet playing, scene setting and tall tales. Lucy Muse is an artist who uses her naked body as a canvas. As part of Thomas & Muse she creates sights, sounds and sensory stimulation in order to portray the surreal themes of Ben's ideas. Ben Thomas is an innovative trumpet player and composer. His original music, ideas and trumpet playing form the backdrop to all that Thomas & Muse create and manifests in a vibrant explosion of colour and experimental sound. Aside from performing Thomas & Muse are prolific content creators and producers of podcasts, albums plus numerous video series. *The song writing of great pop - Jamie Cullum, BBC Radio 2 (2013)*By the end, both band and artist declined into an entropic chaos, a stream of consciousness both verbal and aural that reflected a fall into a metaphysical madness, creating questions that lasted long after they departed the stage - Kimberley Pennell, Get The Chance (2016)*A story with all the drama and extravagance worthy of a full-blown theatrical production - Steve Harris, Fresh On The Net, Fresh Faves (2013)*Marvel in the rather strange sound - Adam Walton, BBC Radio Wales (2016)*