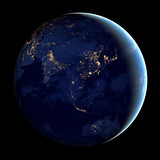 If you’re tired of metal albums where every song sounds the same, The Spiral Sequence may be your new favourite act! The debut album Through Shadow Into Light combines metal, rock, alternative, acoustic and experimental sounds in a diverse mix, where every song has something different to offer. Influenced by the likes of Tool, Iron Maiden, Killing Joke, Paradise Lost and Dead Can Dance, Through Shadow Into Light features the epic gothic metal influenced opener Blood And Ashes, heavy riffing attack of Nibiru, brutal rhythmic assault of The Rage, driving melodic guitars of If, anthemic choruses of Transcendency and an acoustic lament, World Torn Apart. There’s a lot more music by The Spiral Sequence on the way – some will be heavy, some atmospheric and most will be both. All of it will be original. The Spiral Sequence has no limits and no rules. Expect the unexpected!The Spiral Sequence is a solo alternative metal project by James O’Toole, a songwriter and producer from Melbourne, Australia. O'Toole writes, records and mixes all of the music and also creates all of the artwork as a long term Photoshop artist and graphic designer. For a free 3 song download of the tracks Blood And Ashes, Nibiru and If visit www.thespiralsequencemusic.com