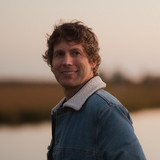 With his seventh album When We Wander due for a spring 2021 release and a series of livestreamed concerts firing up his ever-growing fanbase, Americana singer-songwriter Jesse Terry has ridden out the pandemic like few artists can. Raves from the likes of No Depression ("instant accessibility…brilliance and clarity") and Pollstar ("it’s easy to imagine hearing his songs on the radio in between cuts by Bob Dylan, James Taylor, Jackson Browne and Joni Mitchell") are great, but his fan community is what's truly priceless. A full-time touring artist for the past decade, the John Lennon Songwriting Contest Grand Prize winner and onetime Music Row staff writer normally plays 150 shows a year – from Bonnaroo, to the Philadelphia Folk Festival and AmericanaFest. When We Wander, the first album he wrote since becoming a parent, was recorded live with his band, and the family theme courses through it like a river through a canyon.