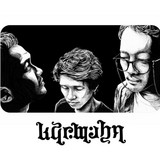 The name Karmahn is taken from the word "karman", technically means that all actions in the world that have a moral element in them will be followed by the consequences. These consequences or impacts can be positive or negative. Where a physical entity that performed an act in the world can enjoy a positive impact in the form of feelings of pleasure or a negative impact that can be in the form of pain. Karmahn's debut album highlights the causality of events dramatically in the form of fantasy stories. Listeners are welcome to draw conclusions for each track presented by Karmahn on this album because the lyrics contained in "non-esse" can have many meanings depending on the listeners' perceptions and moods.Non-esse itself literally means "to be". The album's title was chosen because Karmahn originated from the "nothingness", as of now undergoing process to become a real entity. Non-esse can also be interpreted whatever the listeners want to, there are unlimited possibilities in each tracks. The tracks contained in this album tell a variety of literacy such as prophetic stories,theology, motivational stories, sad stories, and other past stories packed with music influenced by the genre of Heavy Rock / Grunge / Stoner / Post-punk / Industrial and ambiguous lyrics that can make listeners and readers guess what the message is. KARMAHN are : AUL - Vocal & Guitar; IRSYAD - Guitar; BAUZ - Drum