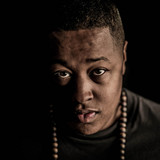 Kadence The Eastside Drummer grew up on the Eastside of Oklahoma City. Kadence found himself submersed in the culture of hip hop at a young age. At 16, Kadence had his own home studio and was producing music for local artists in Oklahoma City and by 18 Kadence was producing and rapping for Christian Hip Hop group Exodus Movement. During his time with Exodus Movement, Kadence found his niche by producing, emceeing, and engineering. In his 10 years with Exodus Movement, they put out five albums and two mixtapes, all of which Kadence was the lead producer and engineer on. In 2008 he produced the track "Go Hard" for Grammy Award winner Lecrae, earning himself his first Dove award nomination. In 2010 he felt led to go out on his own as a solo artist and released his freshman album "Going In". The album won over critics within Christian Hip Hop leading to him being nominated as "New Artist of the Year". In 2011 he produced a second track for Lecrae titled "More" on the album "Rehab: Overdose". This time he and Lecrae won the Dove Award for Hip Hop Album of The Year. In 2013, he dropped his first EP "BandCamp" in March. He dropped a second EP the same year in October titled "Die Daily" which was an instant hit with fans. He also started the Die Daily movement with a collective of other artists and producers whose mission is to serve their community, their motto being Die To Self, Live For Christ, and Serve Others.