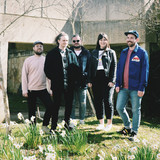 For fans of... Death Cab for Cutie, The National, The Shins, Frightened Rabbit Bridges continue to showcase their thoughtful, nuanced brand of indie-rock as they release the cathartic new single, Star Signs. Star signs is the new single in a run that will culminate in the launch of their Empty Galleries EP in October 2021. Star Signs is another stand out song from a band who continue to mature from track to track. Emotional, honest and reflective lyricism is at the forefront, with notable harmonic exchanges between Ethan Proctor (guitar, vocals) and Chess Williams (keys, vocals). Comprised also of Josh Redman-Thomas (guitar), Henry Matthews (bass) and Tom Farkas (drum), Bridges formed in their hometown after returning from university. Extensive touring on the DIY circuit saw them quickly grow a fanbase leading to notable performances at Glastonbury, 2000 Trees and Isle of Wight. The band’s intimate sound has seen them pick up support from the likes of Clash, Dork, Far Out Magazine, God Is In The TV, Mystic Sons and many more. To celebrate the release of the Empty Galleries EP Bridges will play Rough Trade Bristol (16th October), Seabright Arms London (3rd November *sold out*) and Aatma Manchester (6th November).