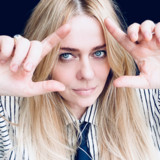 Known for putting her life stories to music with her auto-biographical writing style and personal edge, Lena Anderssen will release her new album, State of the Land, on September 3rd, 2021. Lena has been compared to artists like Tift Merritt and KT Tunstall by the Belgian magazine Rootstime, while music critic Jan Janssen at Real Roots Café compared Lena to classic artists like Joni Mitchell and Patti Smith. This Faroese-Canadian songbird has toured Europe, opening for artists like Xavier Rudd (AUS) and Beth Hart (US), as well as opening a show for Roxy Music (UK). She was also invited to Norway to play for the Norwegian Prince Haakon. Her music had been used in TV-series like Scrubbs, Felicity and Nikita. The new album was recorded in Los Angeles in 2018 with some of the top musicians in the US joining Lena, like Matt Chamberlain and Matt Rollings. State of the Land has already garnered unforeseen significance, as it also turned out to be the very last album recorded by the legendary chief engineer Geoff Emerick – especially known for his pioneering work with The Beatles on albums like Revolver, Sgt. Pepper’s Lonely Hearts Club Band and Abbey Road.