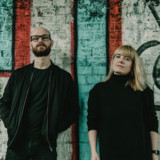 Khashoggi is a duo based in London, formed by songwriters Jessica Craig (vocals) and Michael Webster (guitars) during Summer 2017. With influence from a plethora of artists such as Father John Misty, Weyes Blood, Lana Del Rey, The Beatles, Blur and Elvis Costello; as well as classic blues and jazz artists such as Ella Fitzgerald, Etta James and Aretha Franklin; they produce a sound which has been described as edgy, modern and soulful, but hard to pin down to a single genre. They have played all across London since forming in a number of venues. Khashoggi have also played in Italy, performing at Castaldi Festival near the Dolomite mountains in 2018. Here they met young film director Nicolet Nguyen who decided to produce a documentary following Khashoggi's journey. This was released on 13 May 2018 to a very positive reception. The name 'Khashoggi' was selected by Jess and Michael at a pie shop near King's Cross, after one of their first writing sessions. The pair are big fans of Queen and it is taken from a track on The Miracle (2011 Remaster) album called Khashoggi's Ship - Remastered 2011. They simply thought it was a memorable and interesting word which had meaning obvious only to them and other fans of Queen. This name did lead to some unexpected attention following the death of journalist Jamal Khashoggi, resulting in hits on their website from all over the world and even an interview on radio station in Dallas, Texas.