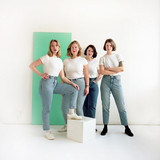 Norwegian indie heroes Razika called it quits with their last studio album, Sånn Kjennes Verden Ut (Jansen Records, 2018), and a highly successful farewell tour in 2019, including gigs at several of Norway’s biggest festivals. Fast forward to 2021, and 10 years have passed since the debut album Program 91 was released. The album was a success, and despite that half the songs were sung in the band’s native tongue, the music reached far and wide. NME, Pitchfork, The New York Times and The Guardian were fans, and the attention brought Razika to both the USA and Japan. Still, it was on their home soil that the band and their debut album really made a splash. With their direct and sincere lyrics about youth and growing up, combined with passionate political convictions, their popularity quickly made them household names. And then there’s “Vondt i hjertet” – a song of such stature that it became a part of the great Norwegian song book a long time ago. 10 years have passed quickly but Program 91 has been out of print physically for half a decade already. Additionally, this anniversary edition has been remastered by Christian Obermayer and also includes a bonus disc of previously unreleased material (both physically and digitally). Fans will be treated to a treasure trove of outtakes, demos, and live recordings from the band’s entire career.