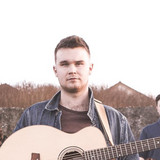 Sam's debut EP - entitled 'Your Way Home' was released in March 2013, which swiftly created a buzz of interest in the folk scene for Sam's music. He followed this up with the release of the widely acclaimed 'Spokes' EP in February 2015. This cemented Sam's place further as one of the most exciting young prospects in the folk scene - landing him a nomination in the Best Singer category at the 2015 Spiral Earth Awards, and grabbing the attention of BBC Radio 2's Folk Show. Touring as a trio with Jamie Francis (banjo) and Evan Carson (percussion), Sam has gained a reputation for an incredibly high class and dynamic live show, and the guys are rapidly becoming firm favourites at venues and festivals in all parts of the country. Not content with resting on his laurels, Sam enlisted the extraordinary talents of new band members Ciaran Algar (fiddle) and Graham Coe (cello) and went straight back into the studio to record his debut album. 'The Lost Boys' came out in November 2015 to a storm of rave reviews, cementing Sam's place as one of the most rapidly rising stars on the UK folk scene. The album also landed Sam the Horizon Award for emerging artists at the 2016 Radio 2 Folk Awards. Sam has been touring the album with his full band - Sam Kelly & The Lost Boys, and they’re due to release their first album, Pretty Peggy (Navigator Records) as a band in October 2017.