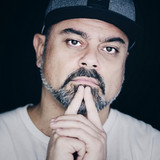 Nach, born Ignacio Fornés Olmos, is an MC from Albacete who grew up in Alicante, Spain. Nach recorded his first demo, D.E.P., in 1994 (Spanish translation of R.I.P.) and the second demo, Trucos, in 1997. After three years with little repercussion, Nach released his first LP En La Brevedad de los Días. Three years later, in 2003, his second album Poesía Difusa was brought out with the collaboration of Lírico from Violadores del Verso, among others. Due to the success of this second CD, a DVD of a show in 2003 in Barcelona was also released. The ACB (Spain's Basketball Club Association) chose him to write and perform the 2004/2005 basketball season hymn titled "Juega" (Play). In the beginning of 2005, Nach released his third LP, the double-CD Ars Magna/Miradas. Miradas, the second of the two, is a conceptual album where each song relates the view of life for different people: a newborn baby, a prostitute, an ex-convict, an immigrant, a blind person, a homosexual couple, people from different cultures, a family in which the father is about to be fired, and a cab driver. This work benefits from the participation of the Arma Blanca and Juaninacka, among others. In 2008, Nach signed to Universal and released his fourth album, Un Día en Suburbia, which hit Spain's Top Sales Chart. ~ Alfonso Goiriz, Rovi