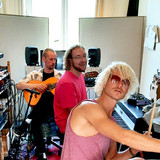 The World was founded in 2007 in Copenhagen and consists of Anton Eger, drums (Phronesis, Jazzkamikaze, RKDIA), Fabian Kallerdahl, keys (Musicmusicmusic, The Splendor, Förnuft och Känsla) and Frans Petter Eldh (Django Bates, Lucia Cadotsch, Y-Otis). The members are spread out over Europe but managed to record their hidden gem-classic "There is an ocean between us" in 2010. Their sound is personal and energetic. Melodic lines, weird chords and advanced rhythmic concepts are merged into a genre of its own. The debut with originals with a jazzy touch and covers of both Boards of Canada and Neil Young on the song list manifests a refreshing lack of interest for being placed in a certain genre or category. In 2019 the band woke up again after an almost 10 year break. 2 sessions in Berlin has resulted in a new landmark for modernistic groovy neo-jazz! Kosmos. With extra-ordinary guest appearances by Otis Sandsjö (Y-Otis) Enjoy.