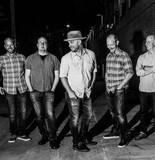 Justin Trawick and the Common Good

Justin Trawick has been performing in the Washington DC area and along the East Coast since 2006, citing musical influences like Bob Schneider, The Tallest Man on Earth, G. Love, Old Crow Medicine Show, and David Gray. In June of 2015, Trawick released his first single, “Goodbye”, under the band name “Justin Trawick and the Common Good”; written about the search for direction and belonging in a world that constantly feels one step ahead of you. Trawick has performed for TedxEast in NYC at the City Winery, TedxPennsylvaniaAvenue in DC at the Newseum, and has opened for over 30 national acts including Suzanne Vega, Wyclef Jean, Brett Dennen, Blues Traveler, Enter The Haggis, Bob Schneider, and Edwin McCain, and shared bills with Dr. Dogg and The Avett Brothers. Justin is the Founder of the nationally touring show “The 9 Songwriter Series” and co-founder of “The Circus Life Podcast.”