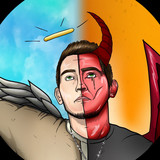 'RISE OF THE NEPHALEM' ALBUM OUT NOW! You aren't going to want to miss out on this new sound and never-before-seen versatility! Ryan Fredderick James Barager, known professionally as SixthSense, is a Canadian rapper who was raised in the small town of South River, Ontario. Coming from a rural town with a population of only 1,000 people, he did not have many opportunities to perform, record, or otherwise get started professionally. SixthSense started out by recording his tracks while living out of his 2000 Mercury Grand Marquis, choosing to use what little money he had to buy beats. Using all he had at the time, his songs were recorded by blaring the beat over his car stereo and using the mic on his iPod headphones. Having come a long way since then, SixthSense has opened for the likes of Madchild, Obie Trice, Swollen Members, Snak The Ripper, and countless others, as well as having since released his debut album, Reflections EP, in addition to numerous singles. Never forgetting where he comes from, SixthSense uses his past experiences to try to help others by often focusing his lyrics on themes surrounding mental health and addictions, as well as social justice for all. SixthSense