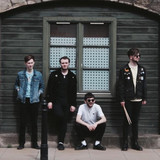 These youngsters take influence from artists such as Catfish and the Bottlemen, Circa Waves, Interpol and The Strokes. Appearing on the same lineup as artist such as Mark Ronson and The Fratellis, and supporting names such as VANT, SHEAFS and Glass Caves, Lost In Vancouver are no stranger to high-profile gigs, and showing face at prolific venues. Their recent releases of “Robyn” and "Rose In Retrospect" have brought thousands of streams to the band’s Spotify account, with monthly listeners and followers being in the thousands. Lost In Vancouver also made some noise headlining a night at the BBC's Heriot Watt stage in the 2017 Fringe Festival, this particular portion of the event being hosted by BBC’s Vic Galloway. With an exciting new lineup, a shiny new sound and new recordings and studio time in the pipeline, Lost In Vancouver are surely one to watch for 2018. ...”if you like your indie rock with honesty and a lot of energy, keep a beady eye on them this year.” - Indie Music Central”