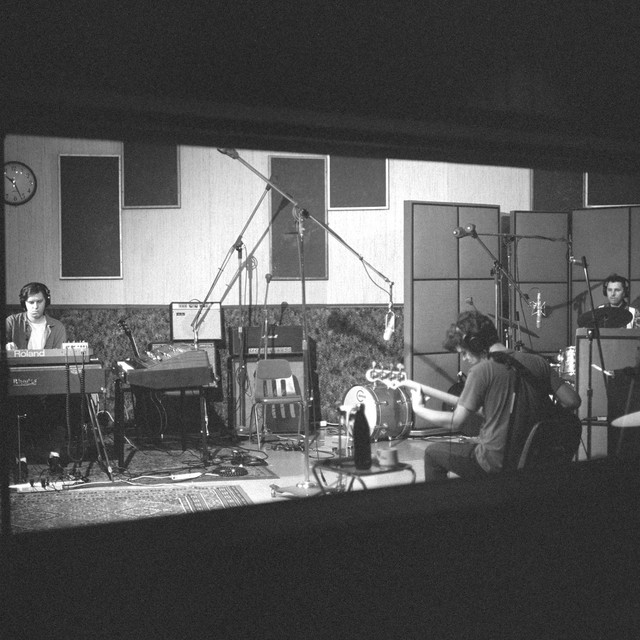 Toronto, Ontario-based jazz ensemble BadBadNotGood make expansive music that straddles the line between '70s soul-jazz, alternative hip-hop, and experimental electronica. BadBadNotGood initially gained attention in the early 2010s playing jazz covers of hip-hop tracks by the likes of Odd Future and MF Doom. It was a sound they developed on their first two records, 2011's BBNG and 2012's BBNG2, covering songs by A Tribe Called Quest and Kanye West as well as My Bloody Valentine and Feist. Since then, they have balanced working on their own original songs as on 2016's IV, and collaborating on projects with hip-hop artists like Ghostface Killah, Kaytrandada, and Kendrick Lamar. Founded in 2010 by Matthew Tavares (keyboards and synthesizer), Chester Hansen (bass guitar), and Alexander Sowinski (drums), BadBadNotGood came together while the members were students at the Humber College jazz program in Toronto. Communing over their shared love of jazz and hip-hop, they composed a piece based upon the music of Odd Future -- a performance of which they uploaded online. It attracted many views and was spotted by Tyler, the Creator from Odd Future. In 2011, BadBadNotGood released their debut album, BBNG. It included covers of music by Odd Future, a Tribe Called Quest, and Waka Flocka Flame and was recorded in just one three-hour session. Following the album release, the trio recorded a live session with Tyler, the Creator, opened for Roy Ayers at the Nujazz Festival in their hometown of Toronto, and performed at Gilles Peterson's worldwide awards. Their second record, BBNG2, was released in 2012, this time recorded within a ten-hour slot and once again featuring original pieces as well as cover versions of music by My Bloody Valentine, Kanye West, and James Blake. In the same year, BBNG was the Coachella Festival's band in residence, playing six different sets, as well as the backing band for Frank Ocean. BadBadNotGood were then drafted to be part of the production and musical composition team for the soundtrack of the film The Man with the Iron Fists. They did production work for Earl Sweatshirt and Danny Brown, as well as a remix on JJ Doom's Key to the Kuffs. The group's third record, III, was released in 2014 and included the singles "Hedron," "CS60," and "Can't Leave the Night." In February 2015, the group's collaboration with Wu-Tang Clan MC Ghostface Killah, titled Sour Soul, was released by Lex Records. In early 2016, the trio became a quartet when Leland Whitty joined on saxophone. BadBadNotGood's first album with Whitty, IV, appeared on Innovative Leisure the following July. The album featured guest appearances from Future Islands' Samuel T. Herring ("Time Moves Slow"), producer Kaytranada ("Lavender"), and rapper Mick Jenkins ("Hyssop of Love"). IV debuted on the Billboard 200 and topped the Jazz Album chart. The group's contribution to the Late Night Tales mix series appeared in 2017. The following year, they collaborated with Sweden's Little Dragon on the single "Tried." ~ James Pearce