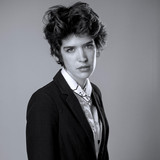 Charly is a French singer, musician and composer based in Los Angeles, California, USA. Always aware that she wanted to be an active creator in the musical realm, she started to sing and play guitar during her childhood. After high school, she earned a Bachelor degree in Art and Communication at the ICART in Paris, France and dove right into the music industry, working at record labels, concerts venues and festivals organizations. She quickly realized she needed more and didn’t just want help other artists to develop their projects. She wanted to develop her own. Since she always sang in English, she decided to take her chance in LA where she has been established for the last four years. During her journey in California, she spent a year in San Francisco studying music production at the Academy of Art University. She discovered there her passion for creating music and sound for movies. Just graduated from the Musicians Insitute, Hollywood, her hyperactivity in the music field never stopped. She created a band called ‘Charly&Faust’ in which she plays guitar, sings and manages everything with her partner Faust. She is also part of another band called ‘The Sutra’ with who she plays bass and does backing vocals. Also a film composer, songwriter, and multi-instrumentalist,

she started to work with Film Students from The New York Film Academy to compose music for their movies. She also work on several projects with a film composer Peace S. Nistades.