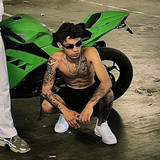 Brought up to the world of music at a young age, Pele Laumann is a half Danish and half half Kenyan 22 year- lyricist, artist and rapper under the name Peso. He grew up in Kolding, Denmark admiring and listening to diversified musical styles and genres influenced by his father until he started creating his own songs. He expressed his music with a raw passion/aggression blended with downbeat and dark melodies of Reggaeton & Trap. Peso’s lyrics are sometimes provocative but will leave you an impression that will keep you engrossed , inspired or feel nostalgic. After Years of trapping on the streets, he met music producer Oliwer Desombre and they began to work music together. Their vision is to delve into different sounds and musical styles. Which mainly goes around mainstreams genres. Pele’s consistency of staying in the music industry gave him a brighter sight of his future to be a successful musician which later gave him rise to his success slowly. One the people who gave him pillars of support is his close friend who is also an music artist named Dyklesh and would often be featured in each other’s songs.