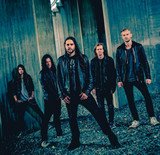 Sweden’s Paralydium was founded by John Berg, with a vision to create an innovative mixture of hard hitting riffs, melodical landscapes and hypnotizing grooves.   John gathered some of Sweden’s most accomplished musicians and recorded a three song EP, released in October of 2015. Simply called "The Paralydium Project", the EP quickly put the group on the map in the world of progressive metal. With influences ranging from metal to prog to classical film scores, Paralydium created a unique atmosphere in their music which best could be described as a journey through space and time.   After receiving fantastic reviews and appraisals for the EP, John understood that it was high time for a follow-up. The writing process for a full-length album began shortly after the release of the EP and took almost four years before completion.   Paralydium's long awaited debut album “Worlds Beyond” was released on Frontiers Records on June 12th, 2020.   It is a concept album where the music and lyrics are coherent during the entire experience. Through different landscapes, or worlds if you will, the listener follows a man on his quest to find higher powers. What he comes across during journey is not what he expected, and he is forced to rethink the purpose of his life.   Paralydium is:   John Berg - Guitars Georg Härnsten Egg - Drums Mikael Blanc - Keys Mikael Sehlin - Vocals Jonathan Olsson - Bass